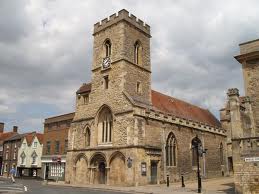 I entered St Nicholas Church on Sunday afternoon with very little idea of what to expect from ‘Nocturne’, merely looking forward to a relaxing hour in the beautiful Church and an opportunity to appreciate some romantic music in the heart of Abingdon.

The first performance was from Diana Hinds, a full-time local musician. I was intrigued before she had even taken her seat, for Hinds wore a red velvet dress, which reminded me of the attire from Merlin and other medieval costume dramas.

It was evident that Diana Hinds is a dexterous musician from the first few bars. Her rendition of Gabriel Fauré’s 1er Nocturne in E flat minor, op 33, no 1, was dreamy, with an exciting dynamic range. The piece was haunting and eerie with subtle harmonies and unexpected resolutions, typical of the style of the French composer.

Before the piece had concluded, Joëlle Pappas rose from where she had previously been seated behind Hinds. Her dress, courtesy of Emma Lyth, was equally intriguing yet very different, with various autumnal colours combined together to create a floaty ensemble. As Pappas approached the central area of the Church between the aisles, she began to twist her wrists and paint a lost, wounded expression on her face. The founder of ‘Joëlle Pappas Projects’ proceeded to perform her original creation, delving into the traumas felt by a tormented and isolated woman, creatively threatened by deception and exclusion.

The routine was inspired by the poetry of Victor Hugo and Théophile Gautier, and Pappas brilliantly captured the trials of her character, telling a story through her expressions of suffering. The entire performance was intimate and each movement was carefully chosen. As Pappas glided down the aisle, the dance was complemented by the delicate dress and the soothing melodies from the piano.

Rory Carver joined Diana in the second half of the concert for a series of French songs, (luckily, translations were in the programme for non-French speakers!) beginning with Fauré’s ‘Clair de Lune’ – not the arguably more famous ‘Clair de Lune’ by Debussy, but an equally soft and gentle song. We were treated to some Debussy shortly after, though, with the bitter sweet ‘Nuits d’étoiles’, ‘Le jet d’eau’ and ‘Beau soir’. Carver’s tenor voice filled the Church with every song, and he showcased his vocal range magnificently throughout. (Just in case you were wondering, Carver didn’t continue the theme of slightly unusual outfits, choosing a blue suit instead, but this did not detract from the impressive quality of each of his performances!)

Reynaldo Hahn’s ‘L’heure exquise’ concluded the concert with its gentle melodies, reminiscent of a lullaby. It was a marvellous choice to summarise the afternoon; an ‘heure exquise’!